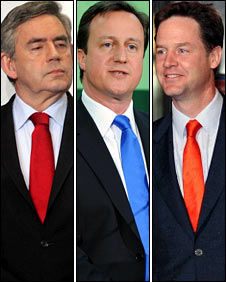 So at full time it’s undecided. But this isn’t football where you can keep playing until there’s a result; it’s more like cricket. So this match is a draw but it’s only the first in the series. But then it is like football in the sense that a golden goal delivers the prize. So whoever wins the first match gets number 10 and the power. There’s no need to keep playing to the end of the series before we add up the wins.

But it’s a complex game and if enough losers decide they’d rather work together than let the strongest team win then the rainbow coalition wins. History tells us that it doesn’t last long and there is a new deciding match after they all fall out with each other and the agreement collapses.

So the winner of the May 2010 General Election isn’t apparent yet and even if or when it is – it won’t last long.

Don’t put those ballot boxes away – in fact you should start recruiting more officials for the Polling Stations so that everyone can at least place their cross before you lock the doors and start counting.