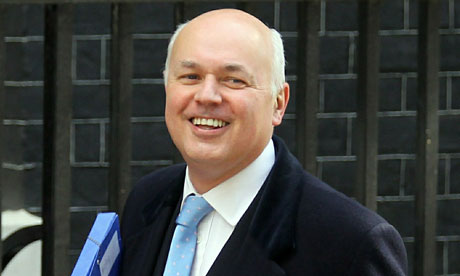 One almost missed it. Just as Iain Duncan Smith was finishing a detailed interview with James Naughtie on his welfare reforms on the Today programme, he used the infamous three-letter word. “That’s a sin,” he said. This is a word normally strictly reserved for Thought for the Day; few, if any, frontbench politicians in British politics are prepared to invoke such a theological category. Let alone use the term in an already highly charged debate on the kind of language being used by the coalition government to describe benefit recipients.

It’s not actually that clear what Iain Duncan Smith was referring to as sinful. The work and pensions secretary was talking about the fact that one in five households in the UK have been without work during a long economic boom; he went on to say that 70% of the jobs created have been taken by foreigners because 4.5 million unemployed were not able to or capable of taking them. “That’s a sin,” he concluded.

Standing back from the textual analysis of what he meant to say, there are two bigger points to make. First, that just using the word “sin” in the context of this issue is fanning the flames of an already testy debate. In the last week, there have been plenty of references to “workshy” people and “scroungers”, and that follows the infamous Osborne remark earlier in the autumn about “lifestyle choices”. Sin fits all too neatly into this narrative of blame and judgment, and for many critics of the coalition government, Duncan Smith will not be given the benefit of the doubt for his choice of words. It will help reverse Cameron’s work in detoxifying the Tory brand, reviving the stereotype of the nasty party, now with an added sinister religious edge. It was a very unnecessary own goal.

But the second point is more important in the longer term. Iain Duncan Smith is a Catholic and many of his key associates are deeply Christian, including Phillippa Stroud, his special adviser, and Tim Montgomerie, the fellow-founder of Duncan Smith’s Centre for Social Justice. Duncan Smith has admitted that his Catholicism “is integral to everything I do” and argues that the “organisations I see on the ground doing arguably the best work are often religious organisations”.

By and large, he has been adept at keeping that faith relatively private and taken care to explain his policies in terms more acceptable to the increasingly secular world of British political life. His interview on the Today programme demonstrated precisely this; he almost managed to keep his religious faith out of it – which cannot be easy for him, because he has expanded at length in an interview with religious media on his beliefs that many of the problems of poverty have a “spiritual base”. Instead, he used terms such as “rational choice” to apply to benefit recipients living on welfare and the “contract” that the state has with them.

But just when the interview was about to wrap up, it slipped out – the theological framework that underpins everything Duncan Smith does as a politician.