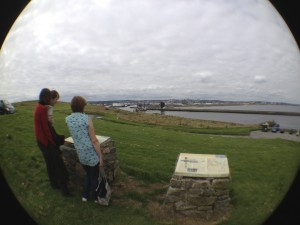 After just over a year in Aberdeen, Matthew and Laura are moving back to Cambridge before the end of the year. Laura has a lectureship at Gonville & Caius College. Matthew has been animating a pilot for a children’s cartoon programme, and now he’s waiting for the next step on the way to it being commissioned. 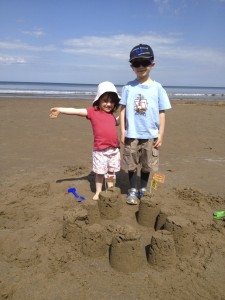 Wesley has started an attachment as senior producer in BBC Radio Current Affairs. Deborah is now Assistant Editor of BBC Essex. Emily has started at nursery at Alex’s school. Both are doing well. They loved their stay with Nanny and Grandad this summer – especially the visit to Scarborough – and so did Nanny and Grandad.

Warwick on his birthday

Warwick is well despite some changes to his diet this year. There is some concern about his swallowing – sometimes he coughs whilst eating his meals. His speech therapist has given advice about the texture foods he should eat leading to some rather heavy handed application of guidelines which at one point lead to all his food being blended. Some firm negotiation on our part was needed. Things are improving, but we’re not quite there yet. Frequent staff changes also make things difficult. In himself he’s otherwise healthy and enjoying life.