David Cameron’s first criticism of the budget speech was that it was delivered with all the enthusiasm of someone reading out the telephone directory. So I assume he thinks the job should be given to a presenter.

I switched off – that’s the prerogative of a listener – assuming that, as the opposition leader’s prime criticism, there was little to follow.

Presentation over content is the scourge of the modern age. Make your talk glitzy enough and no one will notice you have nothing to say. 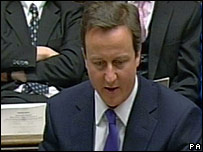 So if David Cameron is elected to power and you want to be Chancellor now would be a good time to put in some broadcasting hours to up your game. Or perhaps David Cameron himself should be given a radio show of his own. If he wants even more popularity he should be a gameshow host, “Vote or No Vote“, or “Who wants to be a Millionaire Tax Exile” with a “Giveaway Budget Jackpot“. The audience figures would be a painful gauge of his popularity.

This is not a defence of Alistair Darling’s budget, just another example of how easily David Cameron can get up ones nose, in the same league as Noel Edmunds and Chris Tarrant.

1 thought on “Give Chris Evans the chancellors’ job”