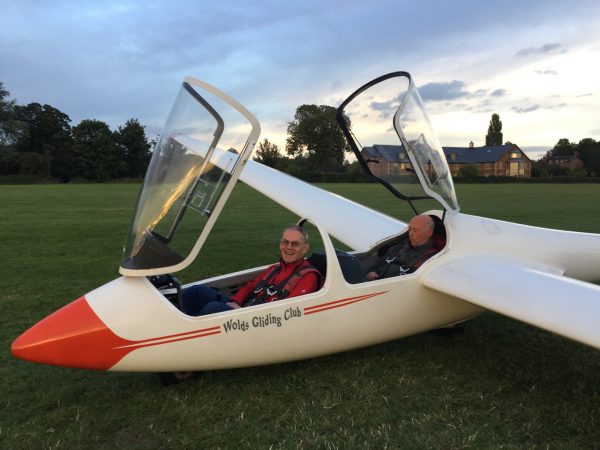 An opportunity to fly in a glider seemed to be too good to miss. One of our church groups – The Outdoor Belfrey Group – needed an extra person to make up the numbers and I was invited. “Yes please”. So on a Friday evening in September we set off for The Wolds Gliding Club in Pocklington for the flight. Joan operated the camera while I slipped on the parachute.

A few rudementary instructions from the pilot in the back seat and we were ready to launch. A giant Chevy V6 car engine at the end of the grass landing strip was attached to the glider with a steel cable. On a signal the winch was powered into life, the cable tightened and the hurled me and the glider up to 1,000 feet above the flat East Yorkshire landscape. I seemed to be moving slower than the seat I was sitting in – something called g-force momentarily churned my inner organs until the glider reached its peak and the cable fell away. Calm, gentle flight followed as we circled in the evening sky.

Now it was my turn. I took the stick and tentatively pushed it forwards, pulled it back … “right … further … you’ll be fine”. So we turned and headed for the landing strip once more. The pilot took control again and soon we were bouncing along the ground. Such a short yet exhilarating flight.

Joan showed me the pictures – and then we headed home. The sky had been the limit.