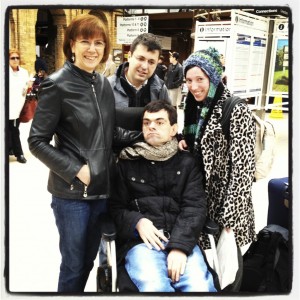 North to Aberdeen by train. A five hour journey to the Granite City to spend a weekend with Matthew and Laura. The idea of these trips was to allow Warwick independent time with his brothers. Until now, despite his 39 years, he has only ever spent time with them in the presence of his parents. So, with some careful planning, Warwick set off with a huge suitcase and several bags, assisted by two support workers to his hotel. Matthew is never short of ideas and they had a full weekend of places to go, things to see and food to eat. When he came home to York he had clearly enjoyed his time away – and so had Matthew. That was in May.

Come September and he’s on his travels again, this time to London and ultimately on to Chelmsford to see Wesley, Deborah, Alex and Emily. In London he took in the sights and a visit to the West End to see Mama Mia – you should know that he absolutely loves Abba. Wes and the family came across to London for an after show meal.
The trip to Chelmsford – as short as it was – was a bit of a drama. Engineering works challenged the train company – Greater Anglia – who took a week to find a taxi company that could take Warwick on the final leg of his journey. We were confident, with the plans in place, he would be met at Shenfield station by a taxi for the short trip to Wesley’s. After all this was the company that transported thousands of competitors travelling to the Paralympic Games less than a month earlier. What could go wrong?
No taxi. No one knew about a taxi. No one could find a taxi. So Warwick was put on a later train to another Essex town and then onto an accessible bus to Chelmsford.
Two hours late he arrived to a joyous welcome from Alex and Emily. Meanwhile an incandescent Wes started to take Greater Anglia to task. They ultimately provided Warwick and his support workers a wheelchair taxi door to door from Chelmsford to his hotel in London. Later they refunded the train fares and apologised ‘for any inconvenience caused.’
Warwick again returned home full of himself. Both Wesley and Matthew felt they’d had a valuable time with their brother who in the future could need more of their love and support.