Outside it’s white over. Heavy snow fell in the night. So Easter Day in York starts with a chill.
New Christians are being baptised in the city today. It was to have been an open air event, but the church leaders have decided to move it indoors. 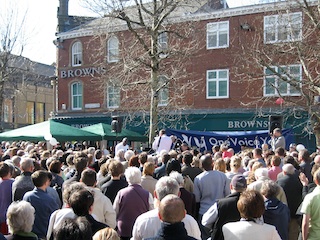 One Voice York
As Britain braces itself for predicted wintery weather, we have made the decision to move what was to be an open-air event to St Michael-le-Belfrey next to the Minster.

Candidates from many York churches are being baptised and you are invited to join the celebration with us at 3pm.

The York City Gospel Choir will be performing and Archbishop Sentamu will be talking as part of this lively unique event.

It’s a day to celebrate Christianity’s greatest event – its dawn. I know many find the fact of Christ’s resurrection from the dead hard to believe, but without it there is no faith. “If Christ is not risen we are of all men most miserable”