Standing within your gates O Jerusalem …. Having lived in the pages of the Bible all of our lives there was something very special about our pilgrimage to the Holy Land in May. We visited dozens of sites linked to the life of Jesus and many other biblical scenes over ten days with friends from The Belfrey and some new friends from other churches across York and Yorkshire.

The first 6 days we were based in Jerusalem in a hotel that overlooked the city walls. Daily trips, mostly by coach, took us to Bethlehem, Hebron, River Jordan, The Dead Sea, Masada and Q’mran. Each with a fascinating story to link the present with events thousands of years ago.

We took hundreds of photographs. This one was taken in the Church of the Holy Sepulchre; a shaft of sunlight burst through a window and dramatically landed on a carefully positioned Joan.

This southern part of the tour was marked by evidence of the present day tensions between Israel and the Palestinians. Police and guards with guns on street corners; restrictions on movement; baggage checks and a general tension in the air. Israel expands its territories at the expense of Palestinian people who are uprooted and herded together in refugee camps along the west bank. It’s not pretty and cries out for justice.

Heading north we arrive at a hotel on the shores of the Sea of Galilee at Tiberias. It was the start of a fascinating journey through the country where Jesus chose his disciples and began his ministry. Sunrise over the Golan Heights, visible from our bedroom, was both glorious and moving.

The pilgrimage concluded with communion on a beach at the north end of the Sea of Galilee. I was challenged. Was this just another holiday or would I be changed by the experience to live for Jesus more intentionally when I arrived home? It was no ordinary trip – it was extraordinary. 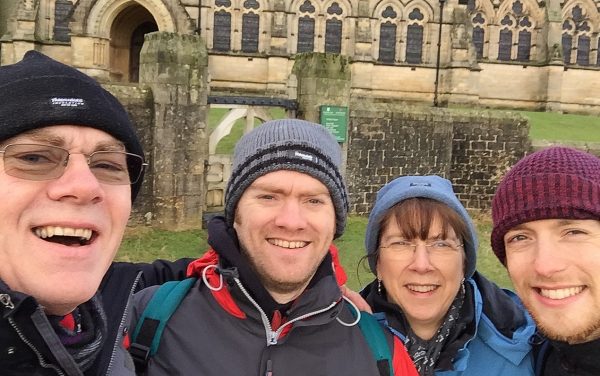 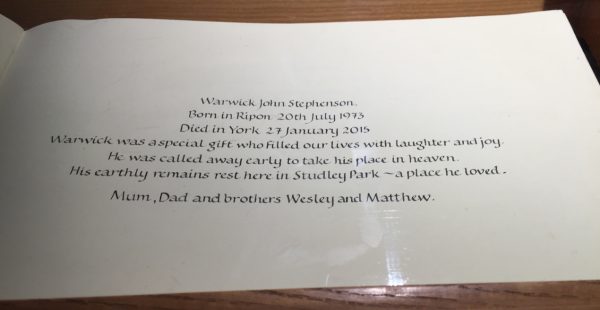 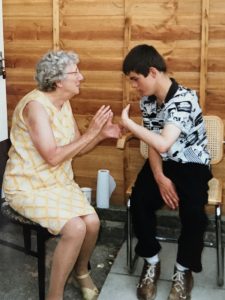 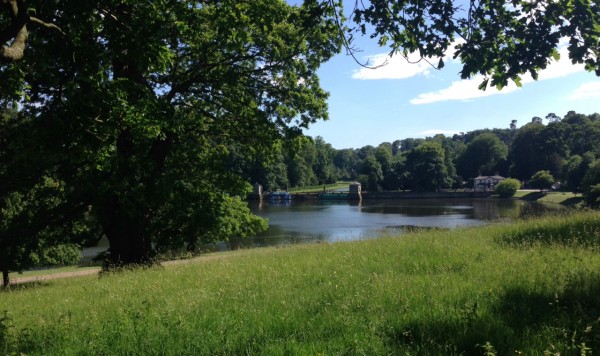 Standing beneath the spreading leaves of the trees in Studley Park overlooking the glistening lake we scattered his ashes in the evening sunlight. The gentle breeze carried them away.

‘ …. He has sent me to bind up the broken hearted …. to comfort all who mourn and provide for those who grieve … to bestow on them a crown of beauty instead of ashes, the oil of joy for mourning and a garment of praise instead of a spirit of despair …. “

We do not sorrow as those who have no hope – but we do sorrow. END_OF_DOCUMENT_TOKEN_TO_BE_REPLACED

Barrie turned sixty five this year and started to receive his state pension. But that’s not what made it a tough year. 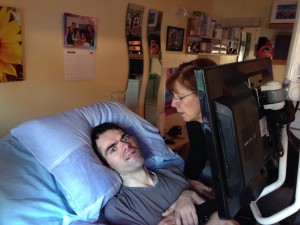 Warwick on the mend

Warwick’s health started to deteriorate and by the spring he was visibly losing weight and suffering from a tremor in his limbs. Diagnosis was a drawn out process of elimination. His anti-convulsants, nasty tummy bugs, and loss of appetite all came under scrutiny.

After losing a fifth of his body weight and becoming very lethargic he contracted pneumonia a few days after a barium swallow test. During the next month in hospital he sank very low, losing more weight, he was emaciated and frail. After leaving intensive care there was a very dark time when his lungs filled with more fluid and it seemed he wouldn’t pull through.

Lots of friends and family were praying for him. The hospital staff were brilliant. At a very critical time a physiotherapist persisted with Warwick and removed over a litre of fluid from his lungs. That was the turning point. We had never known before that physios saved lives – but in Warwick’s case, they certainly did. He slowly started to improve. Perhaps low level lung infection had been behind his demise all the time. He’d been aspirating; taking fluids and food into his lungs because he was failing to swallow properly. A not uncommon thing with people of his age (he’s 41) who have cerebral palsy.

At this stage he had to be strong enough to have a general anaesthetic to have a PEG tube fitted; that is a small feeding tube inserted through the wall of his stomach. In future all of his food, fluids and medication will be administered through this tube. Nil by mouth for the rest of his life.

He is still weak but back at his own home. He is slowly putting on weight and looking better. He now often greets us with a smile but is still unable to move his arms and legs. We hope physiotherapy will gradually help to him to more fully recover. He’s confined to bed for the time being and may not be well enough to come home to us for Christmas. He needs our prayers.

The overhead of going to see Warwick for a few hours each day has, at times, taken it’s toll on us too, but we have been sustained by God’s grace and our good friends, and we’re in good heart. 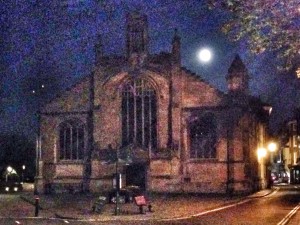 Barrie became a churchwarden at St Michael le Belfrey this year, a year that has seen some difficult changes in the church. A review of staffing brought some pain to the people working in the Parish Centre. There is still some misunderstanding surrounding these changes as two people leave the staff at the end of the year.

A decision to close one of the Sunday congregations has left a number families disenfranchised. Some have reluctantly left the church. Its been a sad and highly contentious time. There have been some heated meetings and its still not clear how things will work out.

These are just two of the things that have presented some tough times for the church wardens, PCC and clergy.

There have been some good times as well. Stories of salvation, healing and growth through the pain are being born out of experience. We have welcomed a new Associate Minister, Greg Downes, and enjoyed the close friendship of people in our two small groups.

So 2015 will be a challenge to maintain the unity of the Spirit in the bond of peace and to focus our mission on reaching out to the communities in which we live and serve.