The most ill-natured interview ever on CD after 55 years | guardian.co.uk 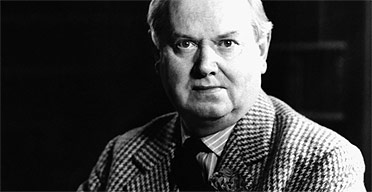 He was a novelist known for his quick and cruel wit, his wide-eyed opinions and his indifference about saying the shocking. So a BBC Home Service programme called Frankly Speaking in which Evelyn Waugh is quizzed by three abrasive questioners was never going to be a walk in the country. Today what was later described as the most ill-natured interview ever broadcast can be heard for the first time since 1953.

This is more like an inquisition than a radio interview. I have no idea why three professional broadcasters should subject him to such an inane line of questioning. It reminds me of some disastrous job interviews I’ve endured. Perhaps Waugh was unwittingly being lined up for a job at the Beeb rather than for a broadcast. At least his sense of humour didn’t desert him.

Asked what failings in others he could most readily excuse Waugh replies quickly: “Drunkenness.” Any others? “Em [long pause] … anger. Lust. Dishonouring their father and mother. Coveting their neighbours ox, ass, wife. Killing. I think there’s almost nothing I can’t excuse except perhaps worshipping graven images. That seems to be idiotic.”