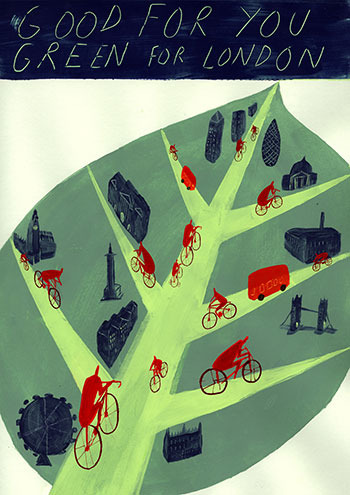 There are some lovely illustrations in this article. They are all drawn from a competition on the theme of cycling. Most of the posters promote the green and healthy aspect of cycling – although there is one entitled the The Joy of Cycling that’s just a bit naughty.

Sad news about the death of Tony Hart. As a kid it never entered my mind to enter a picture for his gallery – let along to imagine seeing it on the telly accompanied by this familair piece of music “Left Bank Two”  BBC NEWS | Magazine | A bit of vibraphone nostalgia

And now he’s gone, taking with him a gentler age of children’s TV shows, although he still had his fans among people much younger than my notalgic age.

I was at the Duke Special gig at The Duchess in York on Saturday. Pete Wilson was promoting his Album Cover Art Competition which was to be judged by no less than Tony Hart. Apparently he gave a moving tribute to Tony Hart at his gig in London on Monday.

The Duke Special gig in York was musically excellent but visually demanding. The low stage and good crowd hid the musicians from view for most of the evening unless you were very close to the front.

Later, Pete moved into the audience and sang at the piano on the audience floor. Very intimate. Good musicians don’t need to stage full of gear to make a good sound. The place resounded with all the fun of a pub singalong. The backing singers were excellent too!

Thanks to Luke for unplugging the cooling fan so that Pete could hear himself sing. It gave a whole new meaning to Duke Special Unplugged.

York Youth Mysteries – A day of free performance in and around the streets of York City Centre. 21st June 2008!

Riding Lights Youth Theatre is performing one of the plays. It’ll be a fascinating day. Just what will our young people make of the traditional bible stories?