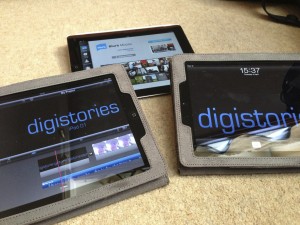 Barrie facilitated two digital storytelling events in 2014. One for the Joseph Rowntree Housing Trust on a new housing development in York called Derwenthorpe. New and old residents of the area told stories of about living in and near this new and, at times, controversial development.

The second was at the Riding Lights Summer Theatre School, where participants told stories loosely based around the anniversary of World War One on the theme Peace… Break it or Keep it

Those workshops may be the last from the digistories business I set up in 2005. I’m reluctant to say “That’s it”, but I think it is.

Joan has continued to work at The Yorkshire Museum and The Castle Museum as an Educational Facilitator but she has put down co-ordinating pastoral visiting at the church because of the demands of supporting Warwick through his illness. Having the time to be with him is more important to us at the moment.

Barrie was at the Riding Lights Summer School again this July. He worked with a theatre director to produce a ground breaking show, Tall Stories, telling personal stories with both digital storytelling and stage play. END_OF_DOCUMENT_TOKEN_TO_BE_REPLACED

This small market town is a cyclists’ favourite place to stop off for refreshments. So I’ve stood here many times. It’s the climax of one of my regular rides. There are about 18 miles on the clock as I pull up and sit on one of the benches on the green outside the Co-op.

I make a long phone call from here – business has to go on and so we chat, appropriately, about arrangements for the storytelling course we’re running at the Riding Lights Summer School.

The summer school is one of the reasons I’m doing this ride. Four Palestinian students have been invited to travel here and I hope to help them pay the airfare. A quick look at the help.co.uk/ridingbike website reveals donations have reached £360.00. Gift Aid will bring that total to £458.00. Good progress for the first few days. The momentum has to be maintained for a number of weeks yet.

After a four finger Kit Kat and some grapefruit juice I’m on the return trip.

An insight from Lucy Kellaway – a columnist in The FT – I have been known to take issue with her in the past. But this time I think she may be on to something – maybe.