Jonathan Cowap did a fun interview with me about the Coast to Coast ride on BBC Radio York this morning. The most important part of the chat was the chance to promote the two charities I am supporting. Riding Lights Theatre and The Funzi and Bodo Trust

But after a lot of banter about bikes, hills, and my alleged fitness Jonathan made a quip about my love of things technical. In response the listeners heard a small confession. It’s at the end of my interview on the BBC iPlayer – about 2hrs 40mins in.

At the time of posting this I’m about to do a final check before setting off for the station heading for Whitehaven and the radio show hasn’t yet appeared on the iPlayer or I would have given you a link straight to the interview.

Refresh FM Manchester: how I was stopped from presenting because I was gay.

I worked with Ian Eyan at Greenbelt FM and was shocked when I read an article in The Guardian’s Comment is Free today that he had been sacked from presenting on a community radio station because he is gay.

I was stopped from being a radio presenter because I am homosexual.

I don’t need to go into a long explantation because Ian explains it all very graciously on his blog. He and others like him who have been treated unjustly should be supported, listened to and valued.

Ian Eyan starts presenting on another radio station on Sunday – I wish him all the best.

I am angry at the way Rupert Murdoch’s empire is exploiting the grief of a bereaved mother to further its campaign against the Prime Minister, Gordon Brown. I am also angry that The Sun newspaper is undermining this country’s difficult military strategy in Afghanistan.

Remember that Rupert Murdoch is only interested in building his empire and making money. He doesn’t care about the future of this country, the feelings of the mother, Jaqui Janes, or the lives of our soldiers in the conflict. News International wants to make money – full stop. It seems to me that if it means undermining a government, exploiting grief or putting military lives at risk that’s all part of the money making plan. By publishing a surreptitiously recorded phone call between the PM and Mrs Janes, The Sun has clearly gone against Press Complaints Commission’s code of conduct to grab another headline and extend the story by another day.

I am also unhappy that the BBC made such a big deal of the story – adding fuel to the fire and exciting the frenzy. Have the other papers gone big on this story today? No, because they recognise it for what it is. They have their own profits to make and thankfully for some of them, their own standards below which they won’t allow themselves to fall.

I’ve heard no end of commentators this morning saying how Gordon Brown must be feeling, but when I heard him speak and answer their questions at his press conference, he sounded perfectly composed and in control. Do they believe that if they tell us he’s losing it often enough it will somehow come true?

So I suggest that if you care; if this has also bothered you; that you stop buying the things that put money in Rupert Murdoch’s pocket – The Sun, The Times, films from 20th Century Fox and Sky TV, and lets starve his empire until he comes to his senses. Or do we want the future of our country to be determined by media barons instead of the ballot box. So Don’t Buy The Sun. OK 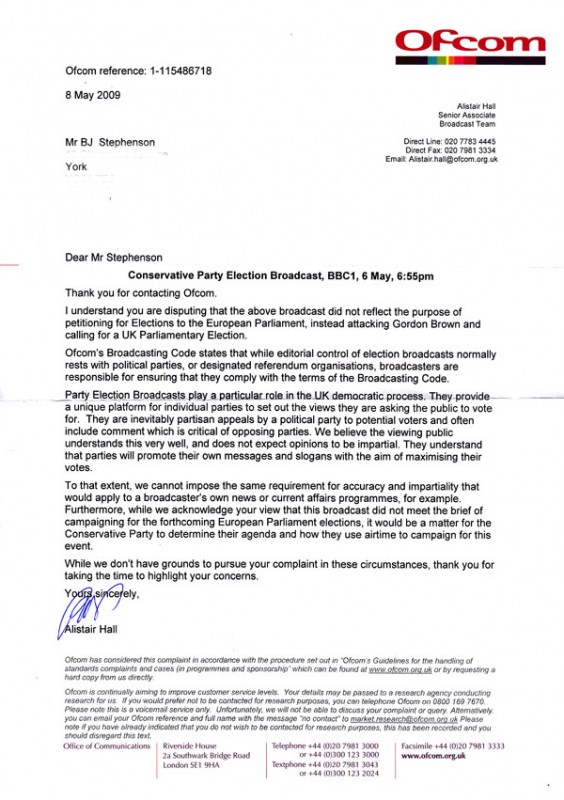 I have just submitted a complaint to OFCOM about the way the Conservatives abused their privilege in tonight’s Party Election Broadcast.

“This was a European Election Broadcast but the Conservatives failed to address any European Issues. The entire Broadcast was devoted to Westminster and English Local Government issues, attacking Gordon Brown and calling for a UK Parliamentary Election.

These Election Broadcasts are given to the parties to inform the public about their policies and why we should vote for them in the appropriate election. In this case Elections to the European Parliament in June.

My complaint is that the Conservative Party used the airtime for another purpose, therefore abusing their privilege.”

Watch this space for their response.