Sometimes as I hit the steepest gradients no amount of weight or muscle power will turn the pedals. So with the experience of my Yorkshire Dales cycle ride in 2008 I visited my local bike shop – Cycle Heaven – for advice. I could fit a smaller chainring on my crankset. So there’s one on order which will hopefully give me that lower gear for the hills.

If this is all too technical for you – this isn’t technical at all. I’m cycling Coast to Coast to raise money for two charities. Visit the Justgiving pages I have set up and be kind enough to make a donation. Let me assure that none of this money is going into the cost of a new chainwheel. Every penny you donate goes to the charity except for a small admin cost taken by the website.

It was a bank holiday. The sun shone, hail fell, winds blew and it tipped it down with rain. But days like that allow moody shots like this.

This question was asked on the BBC News Site and comments were invited. Only a few were published and mine was must have landed in a waste bin somewhere. So – not to waste my thoughts, here they are. It’s worth reading the other comments on the story first to give the context 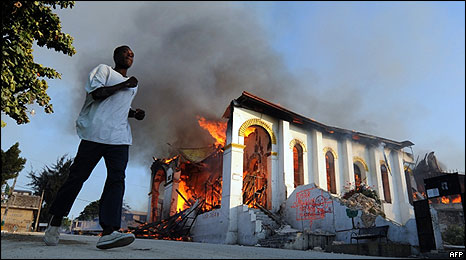 At the heart of Haiti’s humanitarian crisis is an age old question for many religious people – how can God allow such terrible things to happen? Philosopher David Bain examines the arguments.

Evil has always been a thorn in the side of those – of whatever faith – who believe in an all-knowing, all-powerful, all-good God ……….

The Christian scriptures indicate that the earth was thrown into chaos as a result of man’s disobedience. The stories in Genesis describe the events that led to man being banished from paradise.

The result of those actions, actions which if we’re honest we all imitate in our daily lives, was a creation waiting for a day of redemption.
God doesn’t ignore it. On the contrary, he came in the person of Jesus Christ to share in our sufferings. He felt pain, ridicule and all the limitations of human frailty and earthy chaos. Now, wherever there is pain, fear, disaster and chaos, God is right there sharing in our suffering. I can’t fully explain in a few words why that’s a better way.
If you want to know where God was when the earth convulsed in Haiti – he was right there in the rubble. It almost seems too trite to suggest this idea from the comfort of my home in affluent Britain but I know that when I pray for the people of Haiti and the rescue and aid workers there, I am talking to a God who understands and is already there on the case. But he has chosen to work in partnership with us. I believe the outcome, on the day of redemption, will be better than if God had intervened to make crumbling buildings indestructible or hold the tectonic plates under the island in place. Somehow it inspires us to work harder and to sacrifice our resources on behalf of those in trouble instead of sitting on the sidelines and blaming God that it happened in the first place.
And if there is no God, there is no hope anyway. I’d forgotten how much I enjoy cycling through those villages on the edge of York Haxby, Wigginton, Shipton and Skelton. This morning they were bathed in sunshine in a gentler world – just a few miles out of the city centre.

I was on new pedals – the ones that my also new cycling shoes clip into. By all accounts, falling off is not unusual on the first few rides because you forget to disengage your feet before stopping. I didn’t fall off – this time – and so I’m bathing in a little bit of after ride glory. It was a short ride today – just 12 miles – but I must keep it up as the better weather approaches. There will be a fund a raising ride again this summer. My thoughts are towards the Coast to Coast, probably over three days. I just hope it doesn’t rain as it did last year in the Yorkshire Dales. 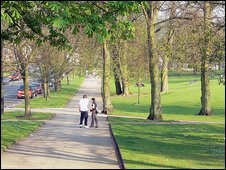 So common sense has prevailed in Harrogate. Cyclists will soon be allowed to use a number of footpaths across this extensive area of grass that encompasses a good part of the town centre.